We took a Dalla-Dalla (3 Ton truck) to Jozani Forest. The saying goes that there is always place for another passenger or baggage on a Dalla-Dalla. We witnessed this because we were never less than 34 passengers and the load on top grew like a mountain. It was an unique experience to be part of  the Zanzibari’s everyday’s living. The Dalla-Dalla stopped to pick up whole bunches of bananas, deliver huge bags of charcoal, bags of potatoes, baskets full of rice and even a delivery bicycle was loaded on top. Some passengers greeted friendly in Swahili but mostly we were stared at and then ignored. They like to ask you where you’re from. We were totally squeezed in at the back nearly sitting on each others lap with no place for our legs because of luggage being loaded all the way where our legs were supposed to be .It was huge fun 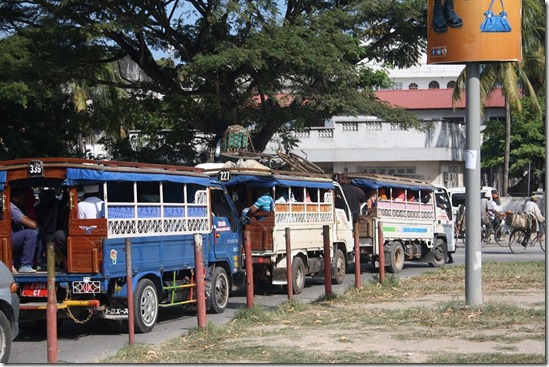 Our Dalla-Dalla leaving us at the entrance to the forest.

Jozani Forest is the largest area of mature forest left in Zanzibar. We saw the rare red colobus monkeys as well as Sykes monkeys, lots of butterflies and did the 45 minute boardwalk through the Mangrove swamp and Mangrove forest which is the breeding ground for lots of different fish species. It was really worth the effort. 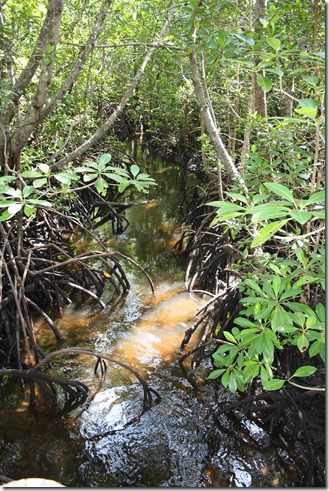 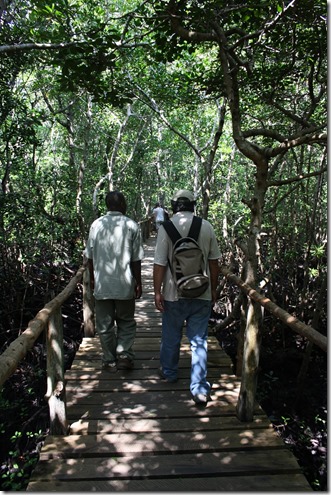 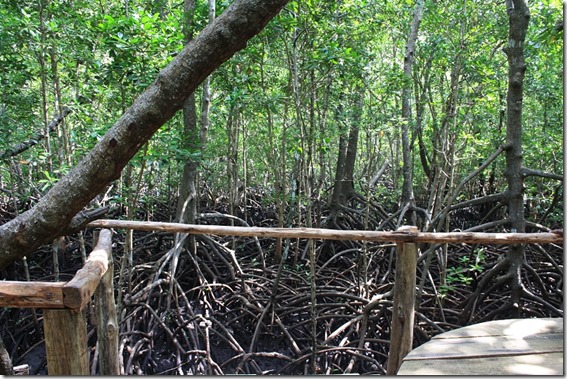 The main channel to the sea. It was low tide when we were there. 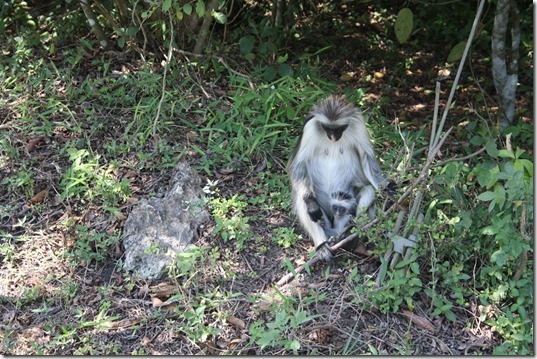 When we left, this mother and baby sat next to the road where we had to wait for our Dalla-Dalla

We waited for about half an hour before a Dalla-Dalla came around the corner. We asked the driver if he is going back to Stone Town and hopped up. It was too full for us to sit together so Arno was squashed between 2 Swahili woman while I was squashed nicely at the back between 2 men. The one was hopping in and out whenever we stopped to get luggage from the top or putting luggage on the top, sometimes long after we drove off, suddenly appearing from above. The guy next to me asked me where I am from and what we were doing. In front of me 2 young men sat staring at me and then started discussing me without taking their eyes one second of me but with a definite twinkle in the eye. I asked the guy next to me what they were saying. He said:”They say you changed your white colour to a light brown”

I thanked them sincerely which they enjoyed. 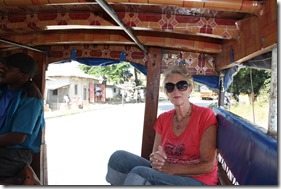 The last 2 passengers getting of in Stone Town

At our favourite restaurant in Stone Town