We crossed the border on the 3rd of July. At the Tanzanian border we got a huge surprise…..! The visas for South Africans has been abolished from the 1st of July

.  We scored $100.  It was a very slow procession to get through Customs. It seemed as if the Immigration officer were new and not knowing what to do. The guy sitting at the other window had to coach him and then he vanished for long periods through a door. Luckily there were an Overland truck driver on his way to pick up Overlanders in Nairobi, who we could chat to while all of us were waiting in the queue. At the gate we were met by a very professional looking guy who told us that he is selling the third party insurance needed for Tanzania. We told him that we do not need a runner and he discreetly vanished after telling us his name. When finished at Immigration,  he appeared and told us we must now go to the Customs counter (which we could see ourselves!) for the Carnet. He talked Swahili to the Customs guy and it seemed as if everything suddenly took on momentum. He hovered around in the office without bothering us at all. The officials told us that we must now go and buy the insurance but we must negotiate. So our new friend named  Seith took us to his office in a small ally next to the Customs building and the negotiation started!   To make a long story short, we bought our Comesa insurance from him and are now fine with third party insurance for all the African countries we are driving through. This was the one thing that we did not get in South Africa. We can really recommend Seith. He was without being intrusive, very helpful. 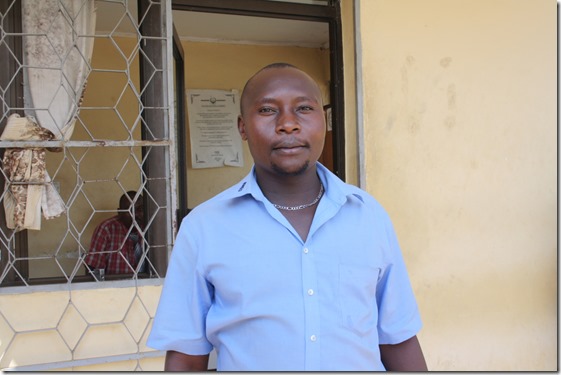 It was a very interesting drive from the border to Mbeya on a winding ever climbing road through tea plantations and rice beds where cattle were grazing. The traffic in Mbeya is chaotic but we could draw money from a Standard Bank ATM before driving to our campsite. We camped about 25km out of Mbeya at the Utengule Coffee Lodge. The whole Cape Colony were there gathered on the Restaurants open stoep. We had a very nice chat with them and afterwards they came to inspect our camp. Stoffel Walters from Malmesbury’s  wife surprised us by putting flowers on our bed and bedside table. That was so cute of her

and well appreciated! They loved our Casa 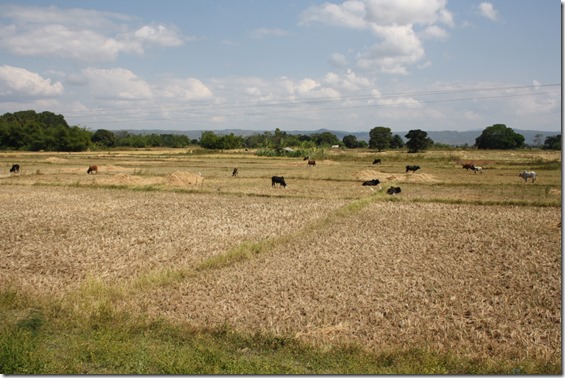 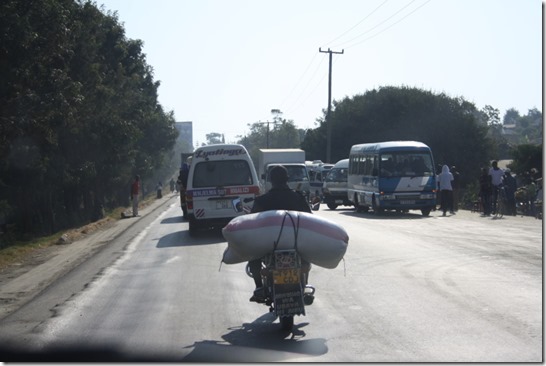 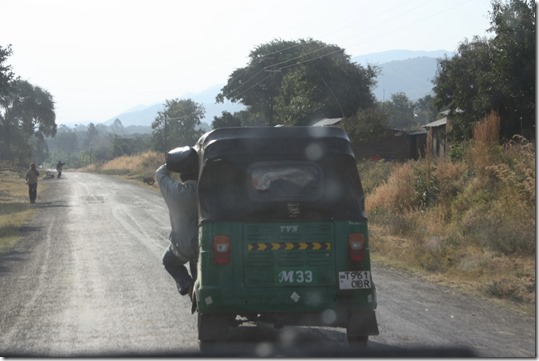 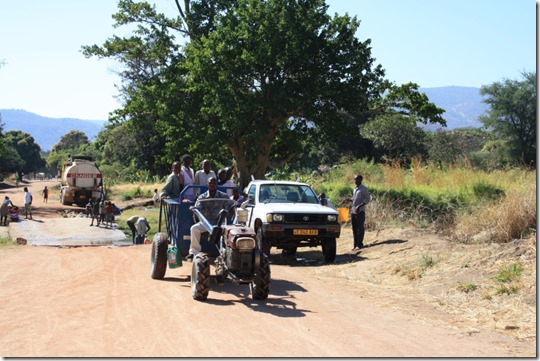 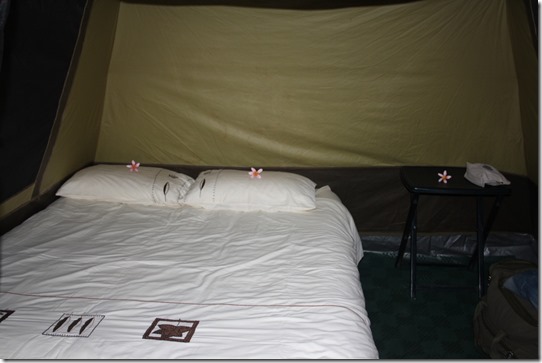 Pink Franchipansies for the nicest Casa in the Campsite

Utengule Coffee Estate is a stopover place that caters rather for people wanting luxury accommodation than camping. We paid $10 per person without electricity and not very nice ablution facilities but it was nice to have internet $5 and to Skype with Naas & Heleen and downloaded emails. 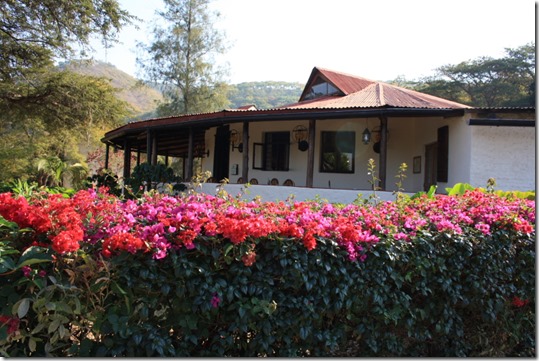 We thought that we could reach Chogela’s Campsite near Ruaha National Park from Mbeya but as previously said….distances, time and road conditions are not what you expect in the real Africa

so we browsed on internet (yes that you have about everywhere!) browsed campsites on T4A and Lonely Planet and viola!! The Old Farmhouse appeared on the scene. we were sooooo glad. We don’t’ want to drive at night and it was later than  usual for us to be on the road. Poor Arno, the driving is really difficult because the road is either very good or very bad and the bus drivers are on a mission to collide with you coming 2 fold from front as the lorry drivers  biggest wish is to jack-knife you of the road when they pass you at an incredibly high speed. It seems that we are the only people keeping withiin the speed limit!!! 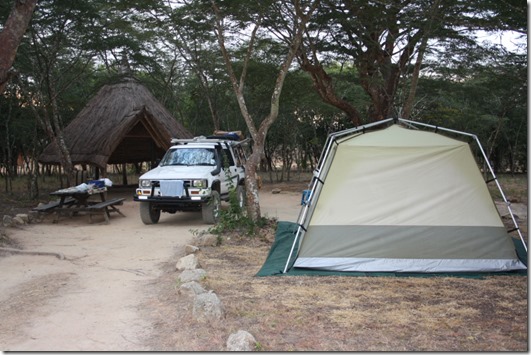 Campsite at The old Farmhouse. Spacious camping at $6 p.p without electricity but with fantastic ablution facilities.

Our next destination was Ruaha where we stayed at Chogela’s Campsite about 10km from Ruaha National Park’s gate. We really enjoyed the huge Campsite, Chongela’s chats and the information that we got from Steph Perkins about her Maasai and He-He tribe Community project named the Ruaha Cultural Tourism Program funded by the UN. She is already 2 years busy with the program and will go home in August for the first time to visit her native USA for 3 weeks. The Manager of the Mahove Cultural Tours (Village tours) is Rectika, a Maasai. It was very interesting to camp there and experience the day to day tribal life. Reminds one of the Himbas in Kaoko. Rectika  insisted on a photo with Arno. We went for a hike to Ruaha’s gate and saw Olifant spoor as well as a huge cat spoor. Lion? 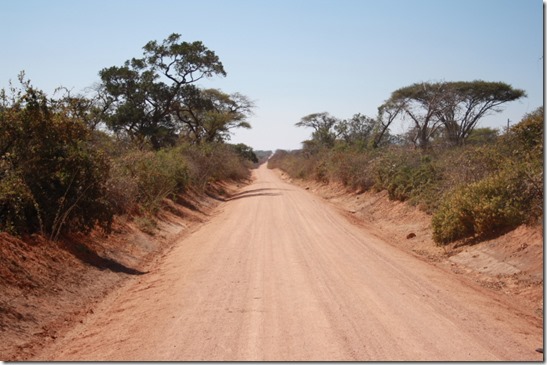 Road to Ruaha. At this stage gravel but will be tarred in the near future 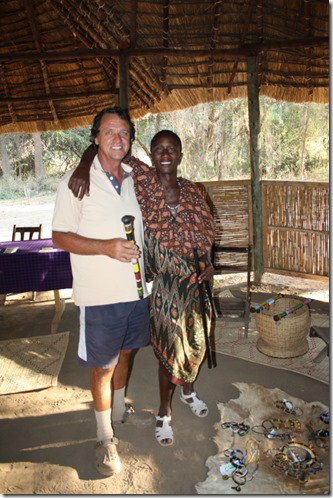 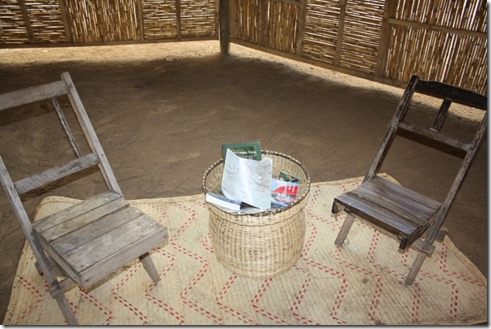 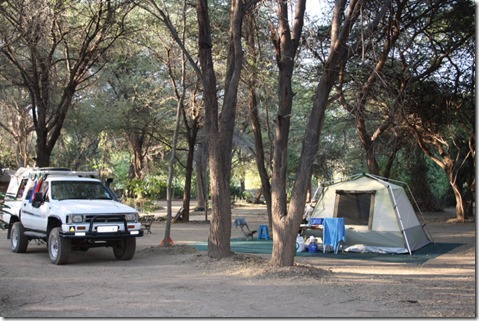 Camping under the trees at Chogela’s

Back in Iringa we stopped in the centre of the city to buy a few things. I stayed at the truck while Arno went shopping. The hustle and bustle is really something to see. The people are very friendly, no harassment, rather trying to teach us Swahili

. There famous greeting of Jambo, (Hallo or How are you, Safari Njema (have a safe journey) and Bafana-Bafana were heard when they walked past. They love to greet by hand (African style) and whenever you say something they like to do the hand thing again…..over and over. 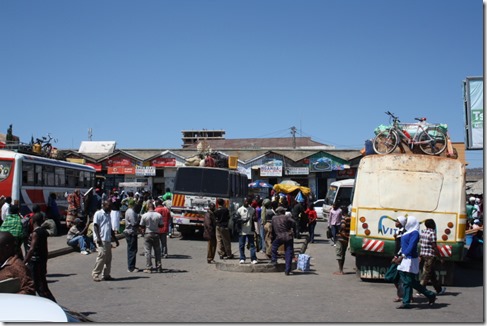 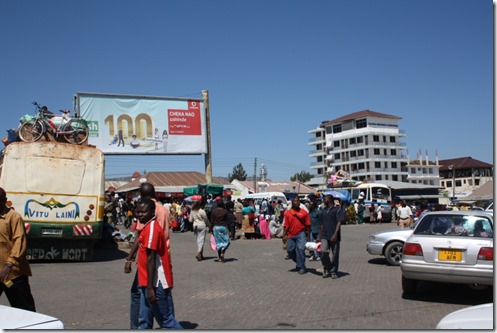 We saw red and green crosses on houses and signposts all over Tanzania. There were also numbers and arrows written on the walls. We asked Kevin that parked next to us in Iringa and started teaching us Swahili, what it means. The Chinese are building new roads and the houses with green crosses must move further away and the owners will be paid out by the Government while the red crossed houses are illegal, must be demolished and won’t be paid out. 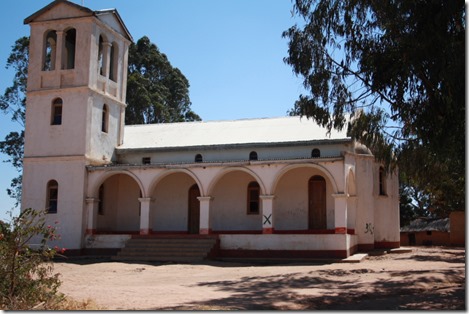 Must move, will be paid out 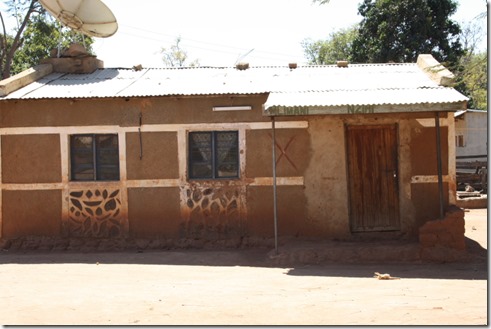 Sorry….not going to be paid out!

2 thoughts on “Our first few days in Tanzania”